In Transit to San Cristóbal

Up at 3:30 am and Bruce got us to the AZ Shuttle stop to catch the 4:30am shuttle to Sky Harbor Airport in Phoenix. Our flight arrived in Guadalajara on time at 1:50pm. This is where my nervousness kicked in. We have all these medical supplies and I’m always concerned the bags will be searched and confiscated. I had documentation for our legitimate charity support, that these donated items are expected by Don Sergio... all in Spanish... but I'm never sure if it will be enough. When one is carrying many items of the same thing, customs might think you are bringing things to sell under the table. I tried to relax by telling jokes to Kathleen.

The Guadalajara customs is a bit more sophisticated than the tiny Tuxtla Gutierrez airport that I'm used to. They x-rayed all our bags and of course started asking questions like, “What’s in your bags?” I explained our purpose and showed my documentation. Most of the customs people were women and seemed interested in our reason for coming to Mexico. One mature customs official, a man, came over and started asking questions. I showed him my documents and he was the only one that read them. As he looked through our bags a young fellow walked up and barely looked through our papers and started telling me I should not bring these items to Mexico without the consulate's permission (I was later to decipher). He was stern and I thought he was going to confiscate it all. Fortunately, the mature man intervened and brushed off the youngster. Once they went through two of our four bags they let us pass... but not before we pressed the red light/green light button.

In any Mexico customs you have to press a button and a light that's like a street light comes on. If it is green, that means pasa le, go ahead through and you won’t have your bags searched. If it is red, that means stop and all your bags are going to be searched.

I pressed… RED light. Kathleen pressed…RED light! The customs people laughed and went through all four bags and then our personals. I smiled and giggled… for some reason the whole thing was funny. Kathleen, la gringa, held the smoothest poker face you’d ever seen! The power of my mother’s prayers is astounding, no?! Getting through customs was my biggest concern. 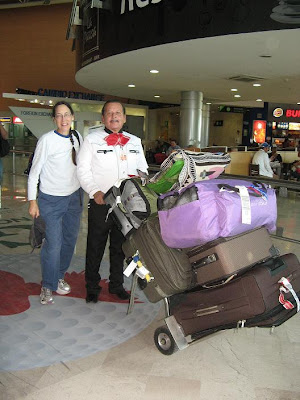 Baggage tightly packed and through customs!

Our baggage was collected by a maletero and got us to a taxi and off we go to Central Camionero (main bus station) to catch an ETN bus to San Miguel de Allende. We knew there was a slim chance we’d catch the last bus going to SMA but we had good mojo with us today and we bought the last two seats and the bus was leaving in 15 minutes!

It was a long bus ride and Kathleen and I had to take separate seats; she was up front and I was in the back. Close to the end of our journey I chatted with a young lady from Poland who was visiting Mexico and on her way to the city of Guanajuato. She gave me a good history of Poland and told me that this was her first trip to Mexico. I told her about our trip, Don Sergio, Chiapas, and its beauty. It sounded like she's on a fairly small budget as she's staying in hostels. To my surprise as she gathered her things to get off in Guanajuato she gave me 100 pesos to donate to Sergio. I don't know why but I'm always amazed at the generosity people show spontaneously. 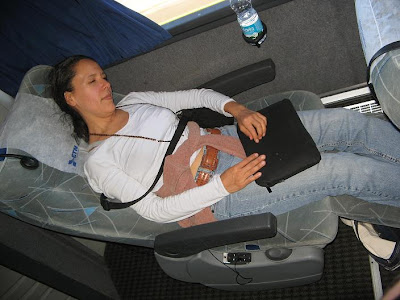 This is not your Greyhound bus... comfy luxurious bus! Five hours to San Miguel.

We arrived in San Miguel safely by 8:30pm. A nine-year-old malatero gathered our bags and took us to the taxi row. The next driver up saw our bags and had a face of "You're kidding... all those bags". I asked if he could take us to our hosts' house and without enthusiasm, "Si quepan," (if the bags will fit). I saw the other taxis and all were tiny cars. We made the bags fit and I had to half sit on Kathleen's lap. We arrived at Louise's house (our kind host) and she had a turkey salad waiting for us. We chatted with her and her friend Leslie and felt right at home. She has a charity, Casita Linda, that she is devoted to that is similar to Habitat for Humanity... again, there are many kind people in the world helping others. 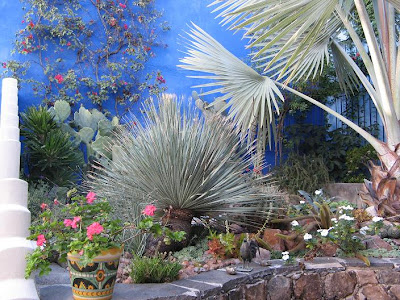 The garden at our host's house in San Miguel de Allende. When I see homes like this I wonder, why we don't live in Mexico.