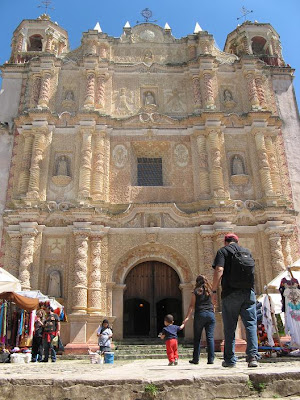 Don Sergio received a call from a young woman whose two-year-old child was burned and was admitted to Hospital de Madres and wanted to know if there was anything he could do. He told them to call him when they bring the baby home, depending on the severity he will either go to their house or they can bring the child to his museo.

I was nearby the hospital today so I went to see the baby to assess the severity. This appears to be a hot water burn to the left face, ear, neck, upper chest, upper back and partial right arm that occurred three days ago. She was well bandage but with dry gauze and so far the burn looks to be mostly epidermal (1st degree) and possibly superficial partial (2nd degree) burn in some places. With burns several days have to pass to see the full extent of the injury. The parents are worried about the cost of care as they have a bill running at this private hospital. "How much does Don Sergio charge?" they asked. The relief on their faces was obvious when I said, "He does not charge". They are obviously under extreme stress. In my broken Spanish, I explained she will receive good care, call him when they get the child home, which should be in a couple of days.

Our afternoon ended early and the group at Bela's wanted to take her to lunch. She chose a Lebanese restaurant which was very good. San Cristóbal is probably the most unique colonial city in Mexico as it attracts different cultures. It has the best Italian restaurants, Argentinian restaurants, French bakeries all operated by their respective nationalities. This is a great town to visit for many reasons, the food and music are just a couple. 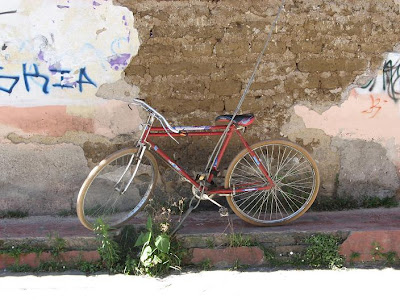 Could not resist this photo, bicycles are not used for recreation but for transportation. These items are kept up as long as they are useful. Conservation is a necessity.

Our evening clinic was packed... it doesn't matter that its Saturday night the patients still come. The cases are as follows:

Of course, since wound care takes multiple visits we saw the usual suspects in addition to the above: the two Zinacantan woman who are miraculously getting better (if Sergio saves their feet, it will be a miracle), the young man with osteomyelitis, another man with a large ulcer in his left tibia, a wheelchair bound man with two ulcers on his right foot (his left leg was amputated seven months ago due to a foot ulcer secondary to diabetis)... the list goes on.

As we were closing shop, a lady shows up and wants an antibiotic from Sergio for her sister's baby whose been throwing up for two days. The baby is eating and drinking and has thrown up twice each day, no fever, no projectile vomiting, no diarrhea, per this lady, the baby is active and does not look sick and is not vomiting after every meal. I informed her antibiotics may not help, take the baby to a doctor tomorrow if she's not better. As we were walking out a young couple comes by to ask Sergio if he can help their 70-year-old father who was diagnosed with kidney stone. The people here do think he's a miracle worker. He told them to try a benign remedy and take him to his doctor.

Many family members come in with the patients, this is the Mexican and Mayan culture. Sons bring mothers in, the grandchildren come with them, sisters, bother- and sister-in-laws... the museo/clinic is packed with people. One patient's son brought us a bunch of short yellow bananas and a kilo of red beans. He proudly told me this food is todo organico all grown by him. I happily accepted this gift and thought, "These people don't have money, they are grateful for your services and they bring one of the best gifts of all: organic healthy food: and I wonder he knew he was contributing to my good health... the circle of life. 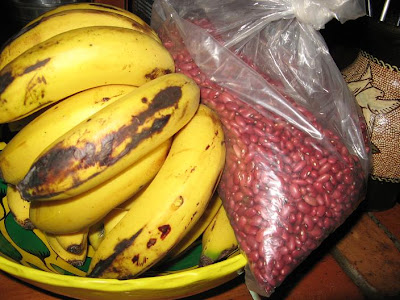