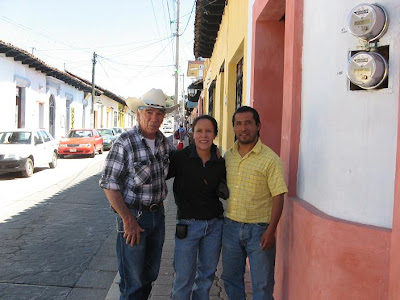 Sergio and I with taxi driver Jose Luis. Kathleen ended up using Jose Luis' services and we liked him so much he became our regular driver.

We had a new house call to see today. The daughter of a 78 year old man had met us at the door of the museo to take us to her home to evaluate him. His significant water retention in his lowee legs and poor eyesight lead me to believe he probably has diabetes. His wife said no, his last visit to the doctor was for joint pain and was given a strong anti-inflammatory which helped but I don't think he was checked for diabetes. Per the patient, the doctor said there was nothing else that could be done. The patient developed a superficial abrasion on his left foot which we cleaned an dressed, however we could offer nothing for the swelling, other than he elevate his legs.

On the way to see other patients we stopped by a building to inquire about the cost of desks for Don Sergio's most recent school project, Vista Hermosa. The store was located in the more industrial side of San Cris next to a mechanic shop. These desks are basic but will do nicely for the students. All we need now is the funding to buy forty. 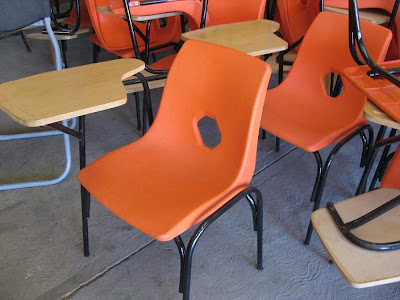 Two more patients later and I was free for the day, until 330. Bela and Manuela had a celebratory final luncheon ready at 230 that was delicous: empanadas, green beans, home-made salsa and jimiaca. 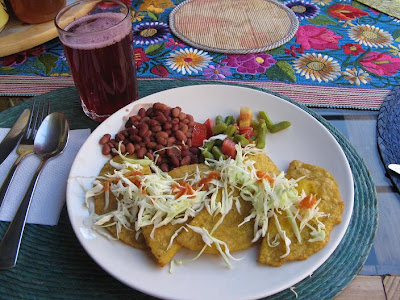 There is a local dermatologist that comes to San Cristobal on certain days that I've been wanting to meet to take our patients that needed biopsies for diagnosis. I finally met him today and it turns out he does not do biopsies: he sends the patients to Tuxtla where, from what I could understand, a dermatopathologist does the biopsy. This seems odd to me: a dermatologist that does not do biopsies. Such an inconvenience and expense for the patient for something that can be done so simply.

The evening clinic was light and only chronic ulcer patients showed. The oldest of the two Zinacantan women did not show. Yesterday she looked ill and the new cough she developed did not sound good. I hope she's in the hospital.

Ana, who is interviewed in El Andalon, is one of Don Sergio's god children (one of many). Occasionally she will come to help Don Sergio and try to get supplies for him. She came by tonight and I was so happy to see her. Ana stayed and visited with us as long as she could but had to go home.

Two guests from Bela's and a few other people from a local language school showed up at 530 for a tour. Sergio was ready to get on with his tour as he had another large French group coming at 630pm. The owner of the language school La Casa en el Arbol is a young woman named Nadia from Italy that I met her 3 years ago. Nadia was the one that directed me to Don Sergio. I was only able to connect with her briefly a year ago but today I had a chance to catch up with her. 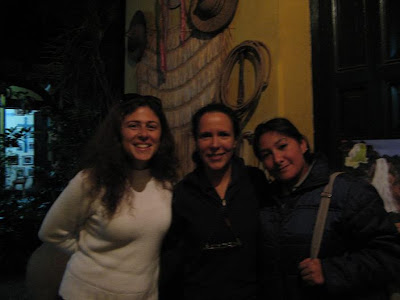 My camera flash quit working. Nadia, me and Ana under dim lighting in el museo.

Nadia explained to me how she's been here for 7 years and she still has so much to learn about the people, cultures, history and life in this area. She still travels back to Europe but when she returns to San Cris it feels home. There is something magical about this place: walking the streets, seeing the different ethic groups of Mayan people, the food is fresh, the aesthetics of the churches, the plants, and the surrounding mountains. Her appreciation for Sergio museo was obvious, Nadia quietly looked around and said there are many signs of the history and people from this area.

It was late by the time the French group left and there was a group of young volunteers with a local NGO that had joined the group for a tour. They hung around for a bit and I could tell Don Sergio was ready to lock the place up. Don Sergio and I said our good-byes and as usual he thanked me and Bruce Lee (mi esposo en Tucson) for everything. My heart was heavy in the morning as we started our day and I was not ready to leave him with the daily heavy load of patients. By the evening I knew it was time to leave, get home and plan the next trip. 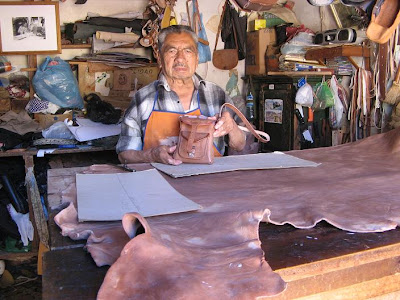 My sister request simple leather purses. I found this one for her...but on second thought I'll keep it. Hecho en Chiapasa, Mexico! 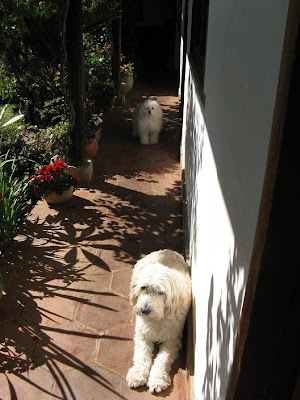 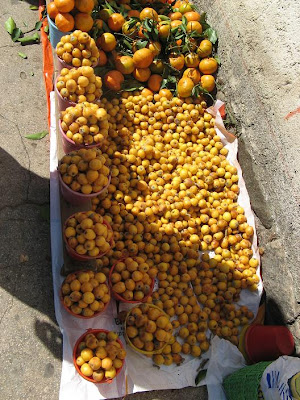 Local fruit... the oranges may have been imported from the coast (not too far). 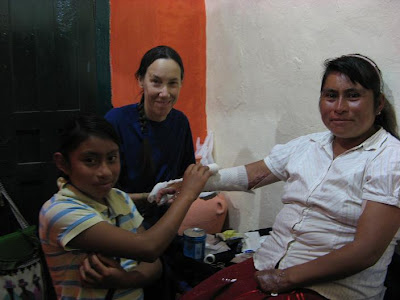 Kathleen with severe burn patient. She was so grateful for Kathleen's PT work with her, she wants a copy of this photo to put on her wall at home. She hugged us both and gave us many blessings. 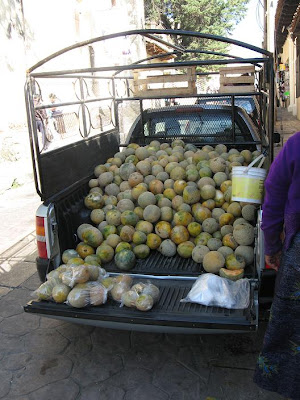 You can smell the sweet cantalope as you walk by.
Posted by Sergio Castro of San Cristobal de las Casas at 1:10 AM