Our day started late as Don Sergio checks on a school project prior to our house rounds. Today he took us to another school where teachers are requesting his help to build a protective wall to keep the thieves from stealing from the school, create a garden, build a porto coche to protect the kids from the rain and prevent the ground from becoming saturated and a fall hazard. They would like to have their own electricity because now they piggy-back electricity from a nearby house.

Our second stop was another school Sergio has been working on for 8 years. It is complete thanks to many foreign donors over the years. The latest addition is solar power so they don't have to plug in to the city electricity.

This is the first solar installation in San Cristobal, thank you TOGETHER SOLAR. 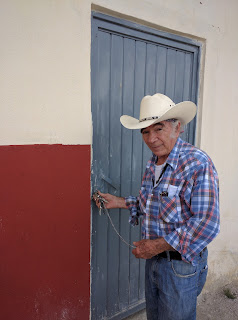 A SPECIAL THANK YOU TO TOGETHER SOLAR
Project Summary:  Together Solar, in collaboration with Yok Chij and IF, are proud to have developed a charitable solar micro-grid in Cinco de Marzo Elementary School in the state of Chiapas, Mexico.  Chiapas is Mexico’s poorest state, with significant unmet needs for life’s necessities, including energy.   Cinco de Marzo Elementary School serves over 300 students who are mostly indigenous and speak a Mayan dialect as their primary language.  Our solar micro-grid provided the school with electricity to power their lighting, school equipment like projectors, and a water pump that brings fresh drinking water to the school.   Batteries ensure that the school has electricity at night or when the solar system is not producing.

About Together Solar:  Together Solar is a mission-based company, dedicated to alleviating global energy poverty, and to expanding solar energy access.  We are focused on leading the urban community solar space, where we build large solar installations on commercial rooftops within our target cities, and sell the energy output to nearby residential customers who have not traditionally had access to solar since they often live in rented apartments, condominiums, or co-ops without adequate rooftop space.  For every kilowatt of solar that we develop, we donate at least $10 of critical infrastructure to communities in need.

Morning house rounds include an elderly diabetic woman whom Don Sergio amputated 2 toes and now a 3rd is becoming necrotic.  The hospital wanted to amputate her foot but she declined, now, even with wound care it is obvious she needs a below the knee amputation otherwise the infected foot and toes will progress.  People are very resistant (anywhere in the world) to have an amputation. However, her long term, poorly controlled diabetes, most likely caused from lack of awareness, inadequate healthcare and patient education, and inability to afford medication all play a role.

Patient number two was an anxious woman with a solitary ulcer caused from an injury a few weeks ago. Basic wound care will help this lesion to heal. Don Sergio had one more pt to see but he usually goes on his own.


The afternoon clinic was busy. A 63 year old Zinacanteca woman has a 10% body surface area burn with 1st and 2nd degree burns. She was carrying a pot of hot coffee and fell and the pot contents fell on her; older skin burns easily and it penetrated her clothing. We then had the typical venous stasis ulcer patients and other wounds and patients seeking consult with Dr. Iserson.

The evening's most challenging case was a man that had fallen backward into a fire and severely burned his back several weeks ago. Debridement is very painful and understandably we US medical providers want to use lidocaine and aggressively debride (scrape away dead tissue). However, if we were to do this, we do not have the resources for post pain management and we do not want to leave Don Sergio dealing with a patient in severe pain.  This case, and the older woman, would definitely be cared for at a burn hospital in the US.

Today, the area needing debridement on the man's back revealed nature doing wound care: maggots.  The dead debris on the patient's back was infested with maggots which is not necessarily a bad thing.  Maggots eat the dead skin debris leaving normal skin alone and suppress the immune system (in turn reducing inflammation) and naturally help the wound to heal. However, continued manual debridement is also a good idea and Don Sergio had Anita gently remove what she could today. The patient will return tomorrow.

Posted by Sergio Castro of San Cristobal de las Casas at 7:57 AM

[video] Dead Simple Trick Brings Any Battery Back To Life

There’s a new way to bring nearly any type of old battery back to life ...so it’s just like new again.

This method works with nearly every type of battery out there ...and it’s simple and quick.

In case you’re wondering, you’ll be able to bring car, phone, and laptop batteries back to life with this.

It even works with solar/off-grid, marine, golf cart, and forklift batteries. Plus, many more!

And this new video presentation shows you how: