Yesterday after the morning rounds there was a man waiting on Don Sergio's museum steps. He explained that his two-year-old son had been burned with boiling coffee eight days ago. This will make three children under the age of four that we will be caring for.

Today, the man met us at the museo at 9:30 this morning to take us to a community called Nichnamtii, which is about a 30- 40 minute drive.

As we were leaving San Cristóbal we were halted by a parade and many children were dressed in costumes. 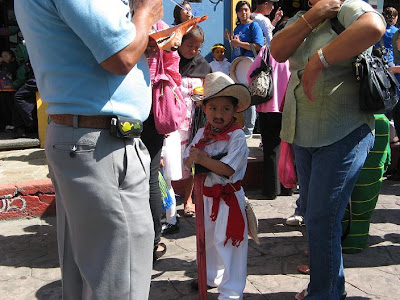 Nichnamtii is on the road to Tenejapa at a higher elevation. It was a bit cooler, more green, and there are more crops and small villages dotting the landscape. This is a cemetery in the style of the local people. Tall trees around the blue Mayan crosses (that are pre-Hispanic) and signify 'the tree of life'. 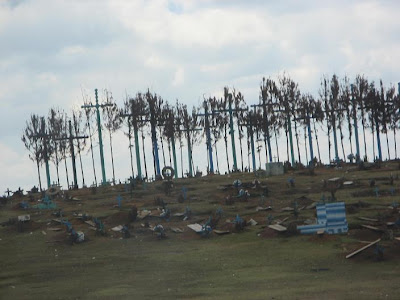 This is a drive-by photo of the local school children. 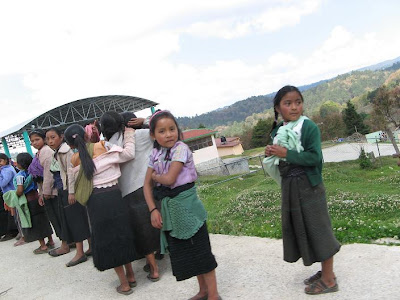 I have photos and a video of this two-year-old but they are a bit graphic so I will put them on a powerpoint or video link at a later date. It turns out most of his right leg from his thigh to ankle were burned to the superficial dermis. It appears that 13% of his body surface area is a first and second degree burn.

These are the women of the house of the two-year-old. They walked us outside and gave us many thanks for helping this child. 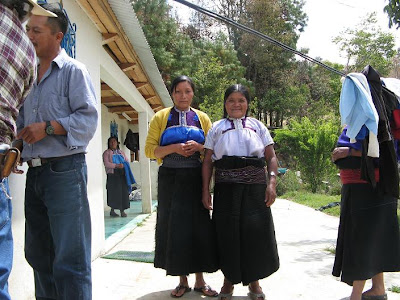 As we left their home I saw a man and two women preparing the soil for planting.... was this what it was like in the US before WW2? 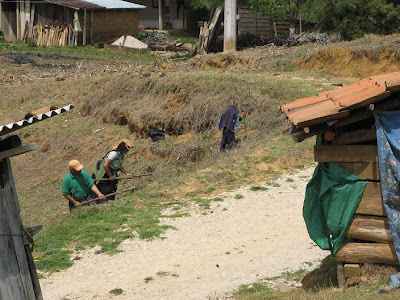 Returning to San Cristóbal we saw our usual patients and afterward I met Bela and Sheri for lunch. Sheri is a guest at Bela's and is an expert in Mexican textiles and lives in Oaxaca. Her website explores the traditional textiles of Mexico and she highly recommends going to Don Sergio's museo. Her website is Living Textiles of Mexico.

As usual we had a tasty lunch – we went to a restaurant called La Canela. A close up of Sheri's quesadilla: home-made blue corn tortilla with potatoes and chorizo and a small pasta salad with small chunks of apples (not in photo) . My quesadilla had nopales and mushrooms with a just enough cheese. So yummy! 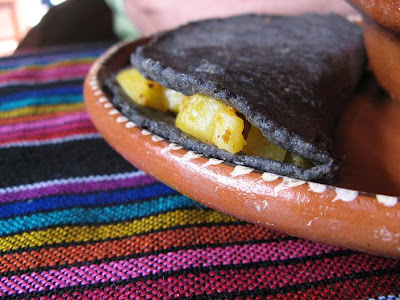 Back to the museo at 4:000 pm and the psoriasis patient had returned and said he was doing much better, however, he complained of a few annoying problem areas. It is difficult to explain that the medicine can take up to two weeks for best improvement and it had only been three days. Since all we had was weak topical cortisone I used the poorman's treatment of applying the cream to the bothersome and thick areas and occluding it with tegaderm (a cellophane-like tape). He will on return on Monday and I will have to explain again, this is not curable but we can try to control it. The sun is strong here and it would help his psoriasis but he is resistant to that idea.

Shortly afterward the patient with the hugely parasitic infected foot I saw six monthw ago came in. I did a biopsy and took him to the lab for blood work. I'm hoping we can find what ails him. He saw a physician a few years ago and was offered amputation of his leg which he declined. This has been present for 12 years.

I have better clinical photos which are to grotesque but this one gives you the idea of how this infection is deforming his foot. 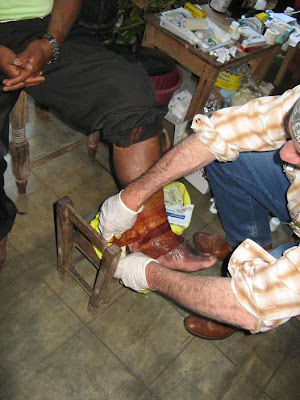 Two blocks from the museo is a laboratorio. The patient did not speak Spanish but he had an interpreter with him. I explained the need for blood work and that I would pay. The lab tech and I soon discovered his interpreter spoke limited Spanish so we spent 20 minutes explaining what needed to be done. Once he understood he agreed. Notice the tech not using gloves: this is not unusual in Mexico. 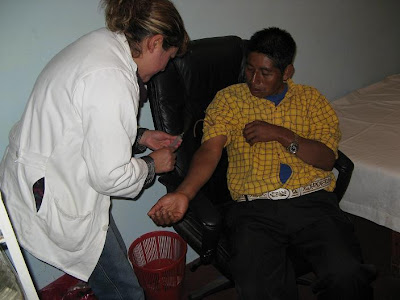 With that taking up most of the evening, when I returned the women from the day prior were there. Kieu left her tennis shoes and socks for the girl with scleroderma as her feet get cold and painful. Many of the locals wear cheap plastic sandals and I admire the ability to do that but in this particular case, the girl would benefit from shoes.

Thanks for the fine comments and photos. We were with Sergio on Monday, July 9. Little has changed. What's interesting is, he looks maybe 50 yrs old -- he is 72, and I am 70. Perhaps his work keeps him so young. Dozens of patients, new one every few minutes. He needs everything, just every single thing. Maybe send money and let him pay the rent at least! And buy some gauze and creams. - Ford Burkhart, Tucson, AZ